I have written, in War on Wheels, the story of a quiet revolution which transformed a vital part of the British Army. During the interwar years it had been made moribund by cautious civil servants and dithering politicians. It became the muscular artery which ensured that the troops landing on D Day had all they needed to do their job.

The organisation was the Royal Army Ordnance Corps whose job it was to supply the Army with all it needed, apart from food and fuel.

The story begins with a massive leap forward from the trenches of the First World War to the motorised world of the 1930’s, a time when companies like Ford, Austin, Hillman and Vauxhall were transforming people’s lives and the economies of towns like Coventry, Luton, Dagenham and Cowley where their factories were located.

It continues through the stuttering attempt to make real the benefits of mechanisation in the British Expeditionary Force which crossed the channel in support of France but was miraculous rescued by the armada of small ships from the beaches of Dunkirk.

Dunkirk is where the story of Donnington really begins. From the declaration of war Whitehall had paid lip service to the need to relocate the great arsenal from Woolwich in east London to a place safe from German bombers. So there was a plan, there were contractors, but progress was painfully slow. This was until they began to load railway trucks at Woolwich.

There were to be three vast sheds at Donnington, but in June 1940 only one was near completion and even then lacked the vital overhead crane and lighting! No 2 shed’s floor was still being concreted as the trucks started to arrive. The 1500 houses that would be needed for civilian staff was still in a civil servant’s in-tray.

Unloading 500 railway trucks in 48 hours was its baptism of fire for Central Ordnance Depot Donnington. The story goes that everyone from the Brigadier downwards took off jacket and rolled up sleeves to clear the railway lines that had become jammed with the Woolwich trucks and the Dunkirk evacuation. 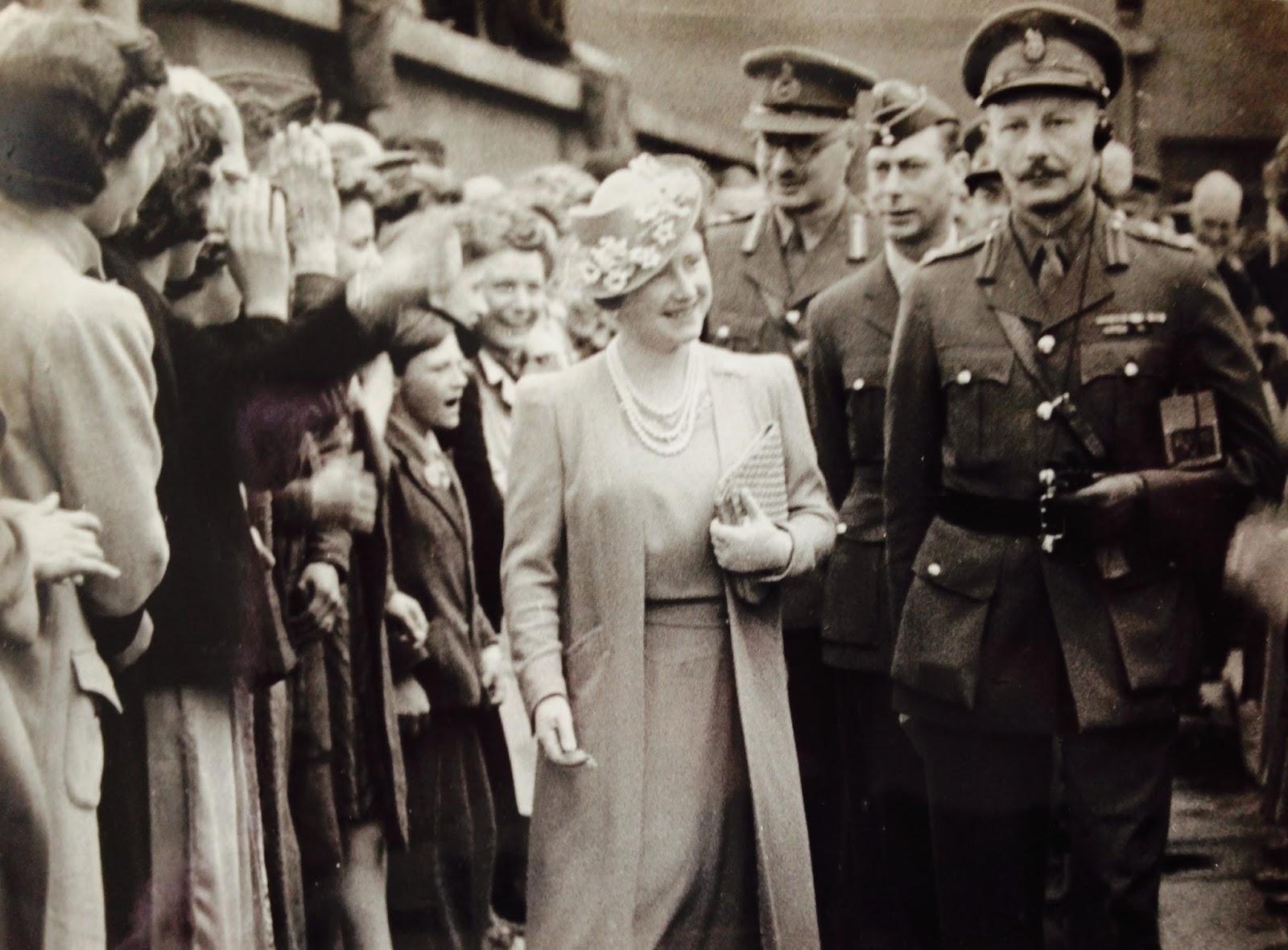 depot, exactly the opposite of the depot it was to replace. There were problems. Far from vulnerable conurbations might mean safety from bombing, but it also meant distance from a work force. Hence the need for housing, but that would take time and time was one thing they didn’t have. They say good comes out of bad. One result of the Dunkirk evacuation was that there was no shortage of troops in England and so sufficient numbers were soon drafted into Doddington but to a life under canvas until Nissen huts could be erected, a low priority given the need safely to store what little ammunition there was that hadn’t been left behind in France.


That was the beginning. Under the command of Brigadier de Wolff (‘Wolffy) Donnington grew into a huge depot employing some 15,000 soldiers, 3,200 ATS, 2,000 Italian prisoners of war and 4,000 civilians. It was state of the art and hugely effective in doing it job. It suppled many tanks to Russia. It had some of the first mobile radar. de Wolff had reputation for discipline and he used this well as he blended together the essential business skills of warehousing and distribution with soldiering. An Ordnance depot must have been like a vast ‘Amazon’ distribution warehouse but without computers. Delivery wouldn't be by courier who’d leave card if the customer was out; it was by soldiers often under fire and always under pressure. The King and Queen visited in June 1942.
at July 18, 2014 No comments:

The Derby Evening Telegraph reported on 31 July 1943 how, in the run up to D Day, Derby school children packed stores which would be landed with the troops on the Normandy beaches. The children were volunteering to help the Royal Army Ordnance Corps with the huge task it was given to pack some 375 million items ready for the invasion. It wasn't only children, but all sorts of volunteer groups.

Turning to the central ordnance depot, I found a daily news sheet first published on 4th October 1943 to give soldiers, ATS and civilians at the Derby RAOC sites news of the war, topics about the depot and forthcoming entertainment, sport and recreation. Just a few examples paint a picture.

Operation Market Garden, the Arnhem mission, is described day by day without any hype and not hiding the terrible losses. An earlier edition had piece about gaskets and how they have to be handled carefully (later there is a piece telling how, in view of shortages, some gaskets were being made from wrapping paper.) On the subject of paper a new recruit is quoted as asking why there is so much paperwork - the answer, ‘it’s all about checking; if everyone took more care it wouldn’t be needed!’ Entertainments were the expected round of films and dances, but interestingly also discussion groups - on 20 October 1943 one on science and religion. 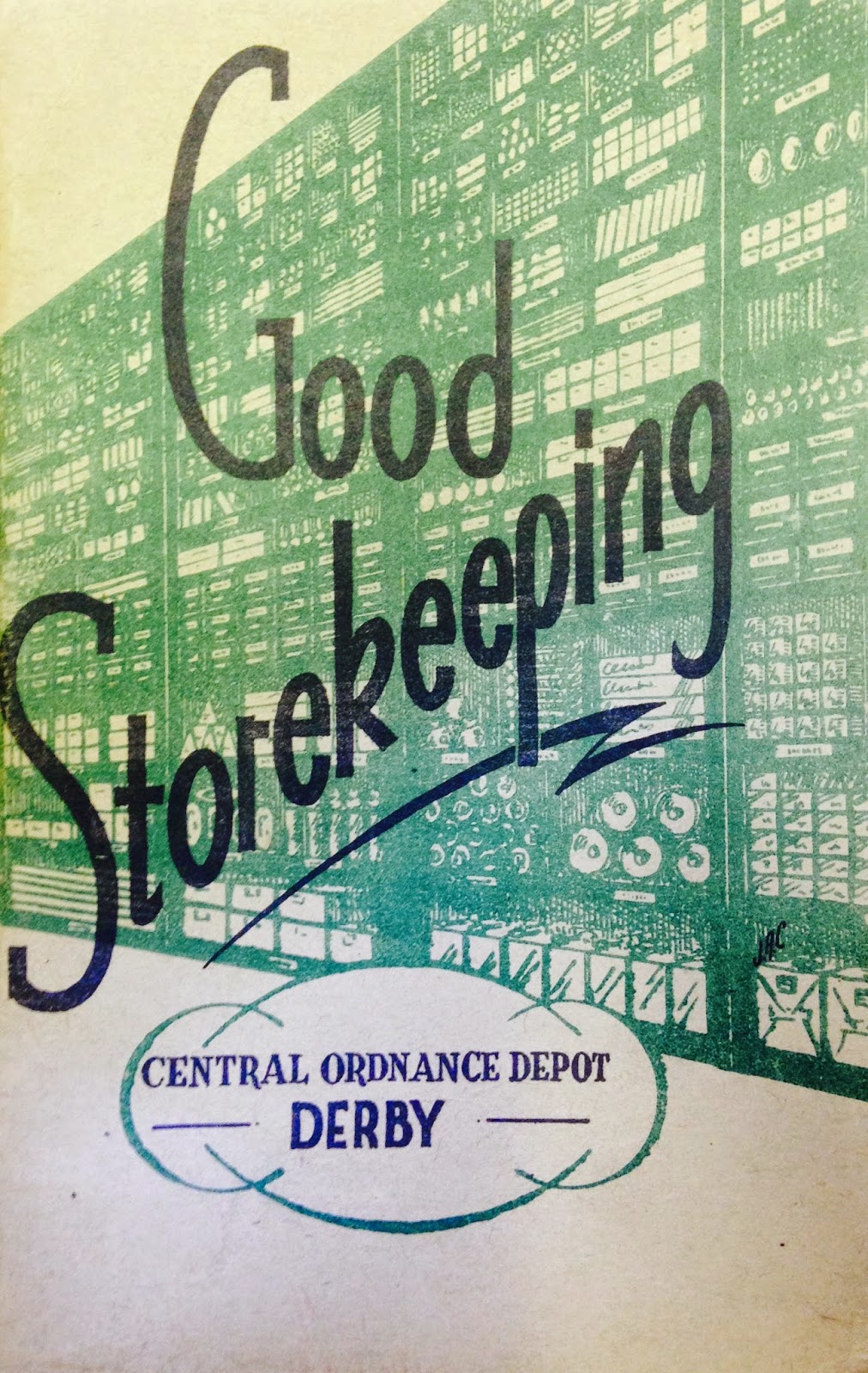 Also from COD Derby is a thick book setting out the system and organisation of the depot. Here the reason for all the paperwork becomes clear. Supplies come in from manufacturers (who need paying) but also USA and Canada. The depot needs to be able to predict usage of individual items so that re-ordering can be done before the stock runs out and without excessive stock being held. All this without computers. It must have been like some sort of Amazon warehouse, but seventy years earlier. The depot produced a wonderful little book entitled ‘Good Storekeeping’, all aimed at accuracy and methodical working.

‘A square mile of junk, weeds, railway lines’ was what we might have seen when Brigadier Williams  visited Chilwell one cold November day in 1934; what he saw was the site for the ‘finest depot for the mechanisation of the Army in the world’. Chilwell had been a major Ordnance factory until partially destroyed by an explosion in 1918. It had lain empty since 1926. There was much work to be done. F Perks & Son of Long Eaton did much of this.

Armies of the 1930’s had to be mobile. Brigadier Williams saw Chilwell as the  place where he could develop an entirely new organisation which would become the blueprint for many other depots and where he could assemble and train regular officers and men to go anywhere in the world where they were needed to open up overseas bases.

A whole new way of doing things was needed. Brigadier Williams picked the brains of the then blossoming motor industry and recruited some of their most able managers. There was a joke at Chilwell that it had become The Rootes Rifles or Lucas Light Infantry. I have read of a coach trip from Chilwell to Fort Dunlop in Birmingham (followed by a night out listening to Larry Adler!). There must have been more.

There were many visits to Chilwell. Photographs record the Duke of Kent and Captain Margesson, the War Minister. The head of the American Ordnance came, as did General Horrocks. Motor companies came including Commer Cars and Solex Carburettors.

At Chilwell men and women worked side by side, as did soldiers and civilians. I have read that, at least to begin with, ATS women had the job of delivering lorries, but without windscreens and so a very cold job. Also I have read of an argument about whether ATS could wear trousers (skirts weren’t a good idea when climbing up into a lorry!) 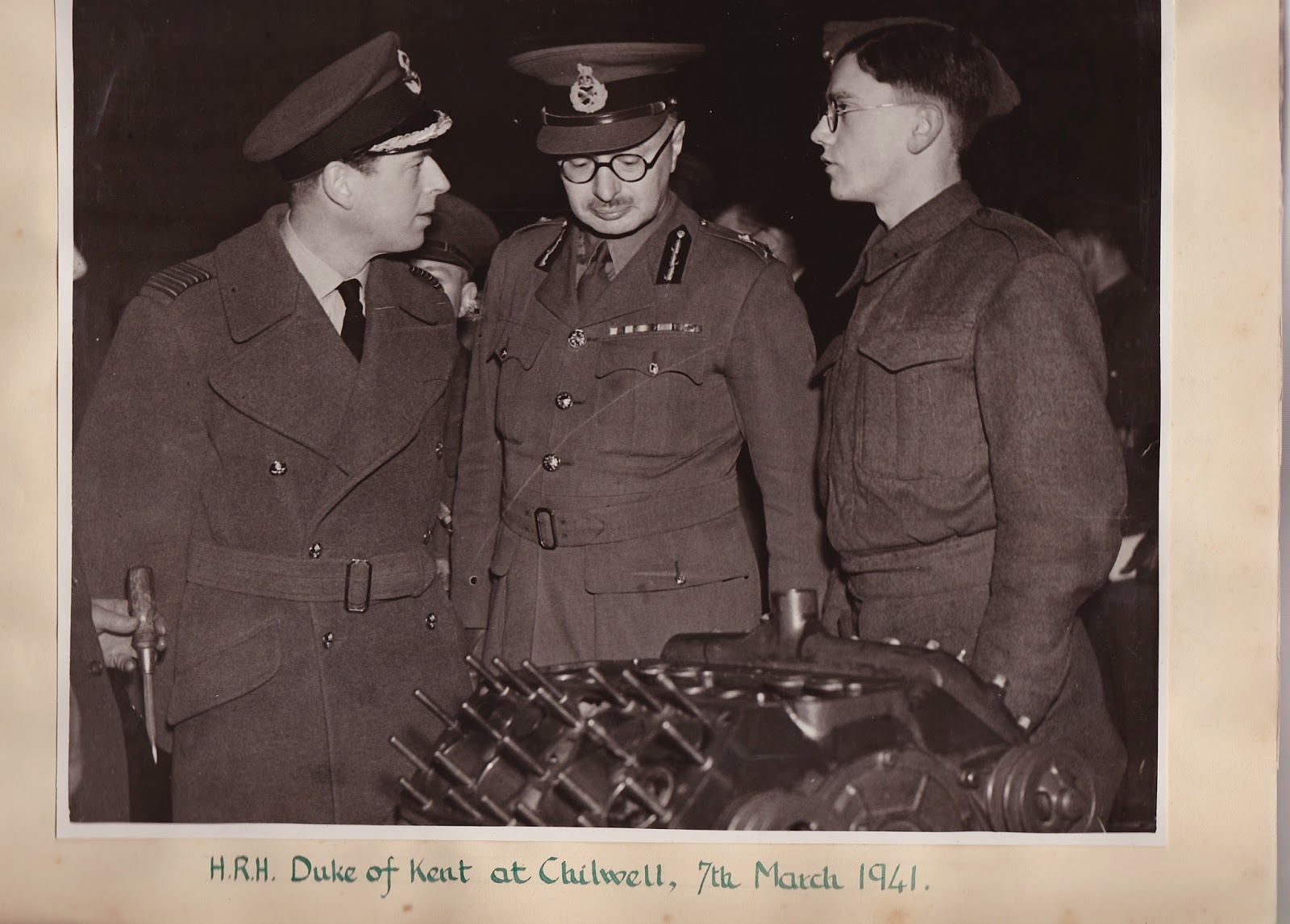 The waste of war

My father fought in both world wars; he was sixty when I was born. I have been reading through the scrap books my mother kept when she was his PA and have found some wonderful material painting a vivid picture of that time.

One particular piece was the text of a speech my father delivered in Halifax in Salute the Soldier Week seeking to encourage more people to put their money in National Savings in order to help meet the ever increasing monetary cost of the war. One sentence in this speech struck me very hard and it was this:

‘War in itself is essentially wasteful and if we are to be victorious we must waste more than the enemy. This is the cost of war.’

My father’s role was to supply the troops with all they needed and so this seems all the more odd; a grim acceptance of a reality.

My father spoke very little about his experiences in the Great War although I recall him saying that in the horror of the Somme quite by chance he met up with his brother. My father was a young officer in the Royal Army Ordnance Corps and my uncle in the Royal Engineers. I wonder what they may have said to each other? Their father had died in 1906 and their mother was alone in England working as a housekeeper at the Conservative Club in St James’ Street, London.

I remember my uncle telling me with incredulity how on that 4th of August 1914 he and very many other young men had rejoiced in the streets at the prospect of standing up for King and country. The Somme campaign was some two years later. The two Williams boys, as their mother still regarded them, were certainly no longer boys. They had witnessed barbarism on a monumental scale. So, would the conversation have been about the horrors, or, perhaps, on an altogether more banal level. Concern for mother and how she must be worrying, but then perhaps the conversation that any two brothers might have, the telling of stories, a joke or two, then a glass or two. It can only be conjecture. What it tells me though is that during all the horror, somehow life did go on. People thought ordinary thoughts, did ordinary things, had ordinary conversations.
Yet some things stick. I know my father had nightmares right up until his death. I can’t help feeling that the inherent wastefulness of men and material must have struck him hard in the trenches and then followed him as he strove to do his job and so work for victory against Nazism, but always in the knowledge of the awful waste this entailed. 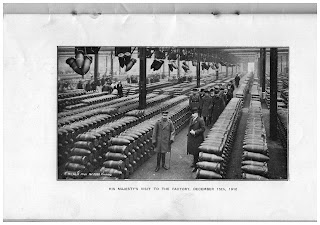