"Bill Williams’s story, and that of his wife, friends and colleagues, so brilliantly set out for us by Phil in `Dunkirk to D-Day` is history, but I commend it as much for it's relevance to us all, military or civilian alike. Bill's portrait hangs in the RLC Headquarters' Officers' Mess. I have walked past it countless times since I was commissioned into the RAOC in 1973. I wish I had known then what I know now, about Bill and his family, his work and his colleagues, but above all of their accomplishments. I would have been better prepared for my chosen profession if I had."

The final paragraph of the foreword of Major-General Malcolm Wood. Earlier he observed:

"We are allowed to enjoy and share Phil's discovery that alongside his father, there were a group of people, many in the `Class of '22` as Phil calls them, most of whom, having served as young officers in World War I went on to have significant roles in supporting the mechanised Army of World War II. As he puts it, “In my research the same names kept reappearing”. What intrigues us as we read is that this group are a bridge in time from one World War to the next. We feel we get to know them as people; loyal, committed, open to change, driven by a sense of duty and nicely old fashioned."

“I have the book and delve into it daily. Very interesting too“. - Fred Keogh ex RAOC

"It is very special for me to read about all those who I knew who did so much for their country and indeed for them and my father to be commemorated. I shall read it carefully, every chapter and will learn a lot."

Toby Neal, feature writer for the Shropshire Star which covers the area which included COD Donnington, has written a fascinating review focusing on Charles de Wolff who conceived the idea of moving Woolwich away from the risk of bombs and was COO at Donnington to which it relocated for most of WW2:

''In his new book "Dunkirk to D-Day" Philip Hamlyn Williams shines the spotlight on the key personalities, who had the common bond of being forged and shaped by their experiences in the Great War, who formed the supply team which made victory possible.'' 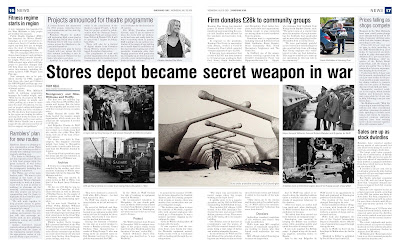 The University where I took an MA in Professional Writing have written about the book as encouragement to the current cohort of students.
Follow this link to find where you can buy Dunkirk to D Day
at July 01, 2021 No comments: