I am a writer of people's stories

I discovered the story of War on Wheels in albums and papers left by my parents. They told the story of the men and women who mechanised the army in WW2. My father, who was the driving force behind this enormous project, died when I was 13 and so I only really knew him when I was a boy. War on Wheels was a quest.

Formerly a partner in accountants Price Waterhouse and then the holder of a number of senior management positions in the voluntary sector, I rather belatedly went to University first to Exeter as a distance learning student gaining a First Class Degree in Humanities and then to University College Falmouth where I was a awarded an MA in Professional Writing. I am now firmly into my third career as a writer.

My second book, MacRoberts Reply, came about as a collaboration between Phil Jeffs, the son of the sole survivor of the crash of the aeroplane that bore the MacRobert name, and Story Terrace. It is the story of that aircraft, the woman who bought it and the men who flew it.

The third title, Ordnance, is really the prequel to War on Wheels. I needed to know what had happened to my father and his colleagues in Army Ordnance Services in WW1 to explain their actions in WW2. The image of the war memorial is a link; it remembered those who died on 1 July 1918 from an explosion at the Shell filling factory at Chilwell; War on Wheels began with the setting up of the Army Centre for Mechanisation on the Chilwell site. Ordnance was published on 1 June 2018. It is the story of the men and women who equipped the British Army for the Great War.

My next project was a biography of William Smith Williams, friend and mentor to Charlotte Bronte and a host of other Victorian writers and artists. He played a small but crucial role in the development of the English novel, was part of a circle of significant Victorian artists and thinkers and had some remarkable progeny. He was my great great uncle. The book, Charlotte Bronte’s Devotee, was published in August 2019.
My most recent project is the third book of a trilogy comprising also Ordnance and War on Wheels. It is called Dunkirk to D Day and was published by Pen & Sword in May 2021. 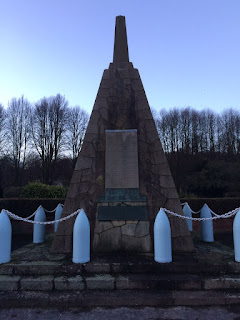