A cornucopia of articles on Ordnance

My mind still boggles when I step back and contemplate just how the British Army came to be so well equipped in 1918.

In 1914 it was hopelessly ill-prepared as I wrote in my piece on Military History Now, Woolwich Arsenal and the race to Modernise Britain's armaments industry for WW1.

In the course of the war Britain's engineering industry would pay a major role, not least in Lincoln whose engineers were born from the needs of our farmers and who used the technology learnt there to produce the tank. I tell more in my blog piece on The very first tank. 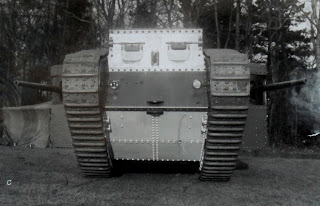 Under Lloyd George and The Ministry of Munitions, probably the greater part of British Industry became involved in the war effort. New factories were built, not least the massive shell filling factory at Chilwell near Nottingham, which came at great cost, as I tell in my piece for The History Press,  Disaster at Chilwell shell-filling factory.

All this materiel had to reach the troops at the right place and at the right time. This was both far from easy as I tell in another piece for The History Press, From socks to scout cars, how to supply the army at war.

I will be talking about Ordnance at an event hosted by Lindum Books The Collection in Lincoln on 17 August 2018.
at August 03, 2018 No comments: