Ordnance, the USA and WW1

It is rather like as essay question; and I have long since done with essay questions! I will though offer a few observations; my book Ordnance has a full chapter on the role of the USA and so goes into much more detail.

I guess that I had not realised the extent to which the UK was top dog in 1914, certainly in relation to finance and world trade: Stirling ruled supreme.

The attritional nature of trench warfare slaughtered many thousands of young men, it also consumed phenomenal quantities of Stirling. A massive army needed a massive number of guns, but trench warfare meant that the consumption of ammunition by those guns was exponentially greater: hundreds of millions of shells.

The greater part of the UK manufacturing sector was engaged in war work and all needed to be paid for. The funds came from taxation, from investments of War Loan (remember that?), but to a very large extend from dollar borrowings.

The New York bankers JP Morgan were appointed very early on to act for the Entente in purchasing from US companies, but also in raising the dollars needed to pay for it all. Hundreds of millions of dollars were raised. Vast quantities of food and much needed equipment was supplied by companies like Holt which made the caterpillar tractor.

All this happened before the US declared war. In a sense this changed everything. Britain sent Missions over to the US to explore the role the US might play. General Bridges who still had command of the 19th Division, Les Papillons, argued the case for standard equipment. Motor companies like Ford put their massive weight into the war effort. Many hundreds of thousands of US troops were equipped and made ready for the final months the war. Many young Americans lost their lives

The armistice brought an end to the slaughter, although for some months men continued to die. The armistice also saw the US Dollar knocking Stirling as the world's trading currency, with the UK heavily in debt. The war had been won, but at a price. 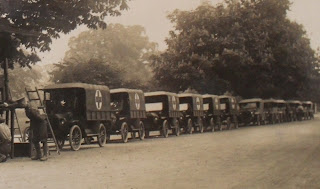 Model T Ford ambulances - image with thanks to Richard Pullen

Barely a quarter of a century later, it was all going to happen again. Perhaps in WW2, the role of the USA was even greater.
at April 27, 2018 No comments: