The supply blueprint for D Day

In Detroit on Sunday 13 June 1943 UK Ordnance Chief, Bill Williams, met with his American opposite numbers and worked out what was to become the blueprint for D Day for the vital supply of spare parts for the thousands of vehicles that would cross the channel in June 1944.

A number of problems needed to be addressed.

Full sets of spare parts were being shipped, whereas experience showed that it was only 10% of items that fell regularly to be used in order to keep vehicles moving. This meant that the spares pipeline was full of items that may never or hardly ever be needed. A reduced list of frequently used spares would ease the flow.

Spares were being shipped in box sets of 100 and the receiving Ordnance staff were faced with the task of searching, 'mining', for the item they needed. Spares packed in multiples that reflected likely usage, and clearly marked would save the time spent in searching.

Different spares were needed at different periods in a campaign. A few common items would be needed for beach landings, a slightly larger number for field maintenance and a full set for Base Shop.

The spares had to be packed in clearly marked boxes for landings and these had to weigh 70lbs or less and have rope handles to facilitate handling on the beaches.

It was Bill's 42nd birthday and so an appropriate present that would make a big difference when the invasion took place. 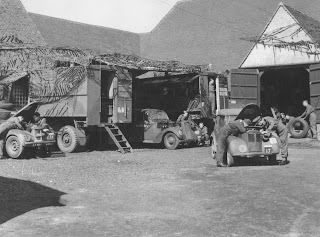 In his brilliant book, The Churchill Factor, Boris Johnson gave his take on the birth of the tank. Next year Lincoln will be marking its very particular role. This is an extract from War on Wheels about the early years of the tank.

The tank was a British invention, the first examples having been manufactured by William Foster and Co in Lincoln.

In 1915 Winston Churchill became horrifically aware of the stalemate of the Western Front and how young men were being slaughtered because, whilst mankind had invented bullets and shells, it had not yet found an effective defence against them. Thus time and again the order would come for an advance and time and again it would fail with horrific loss of life. What was needed was a machine out of HG Wells, a ‘Landship' protected by steel armour capable of travelling over trenches, mud and barbed wire. With Churchill’s influence it was the Navy who made the first prototypes.

The biggest problem was the sheer weight of armour. Eventually two alternatives emerged, one with a large wheel and one with caterpillar tracks. It was not Churchill himself who gave the orders for their production, since he was out of office following the disaster of the Dardenells. Contracts for the two alternatives were awarded to Fodens for the wheeled version and Foster for the tracked vehicle. The project was of course secret and it was let known that the factories were producing motorised water ‘tanks’ for use in Mesopotamia; the name though stuck. The tracked version proved vastly superior and over four thousand were produced.

When Churchill returned to office as Minister of Munitions, he resumed oversight of the project and so had a hand in the victory at the battle of Amiens in August 1918 when 600 British Tanks sent terrified Germans into headlong defeat. In time they recovered their cool, but crucially morale had been broken by this invention with which Churchill had had more than a hand 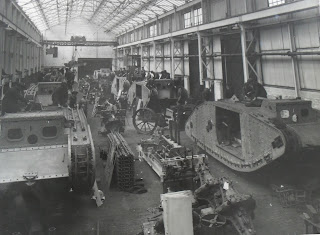 Tanks under construction at Trittons - with thanks to Richard Pullen
at June 02, 2015 No comments: