A feature of the world wars was the crucial role played by people from civilian jobs.

Edgar Readman worked in the steel industry in Sheffield before serving as a lieutenant in the South Staffordshire Regiment. He was posted to the Tank Battalion, being promoted to captain on 30 November 1917. After the war he returned to the steel industry in what became English Steel. He remained in the territorial army during the interwar period and was called up in the RAOC on the declaration of WW2. He succeeded Bill Williams and then Harry Whitaker as COO Chilwell in 1940, and ran it and the Motor Transport activities of the RAOC until he returned to English Steel after the war.

I looked at the management style of a number of the officers who had come from industry.

Reddy Readman at Chilwell wrote his management report with a focus on numbers; we might view them as Key Performance Indicators. In April 1944 he reported that during the month some 17,573,206 items had been packed in cartons bringing the total to date to 143,643,187 using some 6,265,340 cartons. The packing operation was extraordinary, with volunteers from all walks of life including school children helping the military and civilian staff of the depots.

He reported on the printing of labels which was saving many man hours. The printing department at Chilwell had expanded into an operating employing some 250 people.

It is also clear from his report that the field operations were being put together ready for transit on and after D Day. The Advance Ordnance Depots were staffed and supplies were being earmarked. The same was the case for the Forward Trailer Sections and Ordnance Field Parks as well as for the Landing Reserves and Beach Maintenance Packs. Of crucial importance he reported that work on Wading and Ventilation Equipment was complete and so the department could stand down. 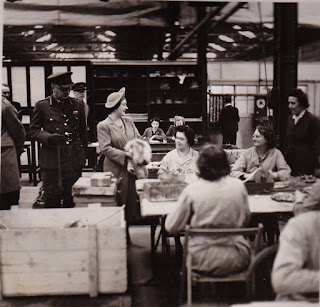 Civilian packers at Chilwell on an visit by the Queen

Alfred Goldstein was commissioned from the Royal Military Academy at Woolwich, “The Shop”, to the Gunners; he served from 1916 until the end of the war in France with the 154 Siege Battery RA, and there he rose to the rank of major, in command of the battery, at the age of twenty-two. He was twice wounded whilst in action with the battery and he carried a number of pieces of shrapnel in his arm for the rest of his life.

He passed out top of the First Ordnance Officers Course at Woolwich (Class of '22). In the interwar years he served at Catterick and Didcot; in both postings introducing modern management methods.

He was posted as COO Greenford on his return from Malta having served there during the siege. Greenford’s main functions were the receipt of warlike stores from manufacturers, their storage, maintenance and issue to units at home and overseas. The depot also assembled complete units from many thousands of single parts. As with the other depots, there were workshops working alongside.

Greenford played a major role following D Day, as the focus for armaments and technical stores and the first port of call for demands from the Advance Depots over the channel. 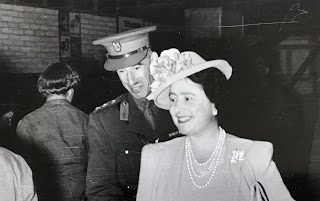 Goldstein with the Queen on a visit to Greenford
at March 26, 2021 No comments:

Geoffrey Palmer always took great pride in the fact that he had risen through the ranks. He had served during the Great War in the London Regiment rising to the rank of captain. He then transferred to the RAOC and was one of the group of officers to attend the first Ordnance Officers course (the Class of '22) to be run at Woolwich after the war. His service during the interwar years included a three year posting to Palestine.

On the declaration of the Second World War, he returned from Palestine to become Chief Ordnance Officer at 1BOD in Nantes supplying the British Expeditionary Force with warlike stores. In June 1940 men from the  Nantes depot were evacuated together with RAF ground crew and many others on the SS Lancastria which was sunk by enemy fire with the loss of three thousand lives. It is not clear whether Palmer was a survivor, but there is evidence of him suffering trauma.

In 1941 he was given the task of creating a whole new depot at Bicester near Oxford. This combined armaments and vehicles and boasted the largest tank repair shop then in existence. He commanded Bicester until the end of the war, when he was moved to Chilwell to head up all Motor Transport activities with the rank of Major General. 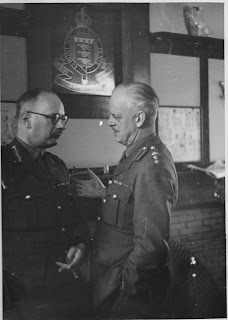