This photograph has accompanied me all my life. 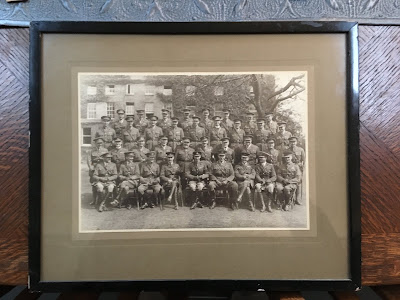 I have always known who one of the young men was, my father then known as Bill Williams although he had been baptised Leslie. Of the others, I could recognise the Duke of York and the largest man in the front row, as a child, I named , ‘prawns’, I suppose because of magnificent moustache.

When it was taken or where I didn’t know, any more than I knew the names of the other young and not so young men. All was partially revealed in 2015 when I found the same photograph in the archive of the Royal Army Ordnance Corps annotated with names. I say partially revealed because whilst the names were there, I still didn’t know who they were, whence they had come or whither they would go.

The photograph was taken on 2 May 1922 at the then HQ of the RAOC at Hilsea and many of those in the picture were on the very first Ordnance officers course held at Woolwich . That course, comprising two dozen men from the RAOC but also the RA and Indian and Canadian Ordnance, produced no fewer than five Major-Generals and eleven Brigadiers.

I embarked on a quest and, just in case it may seem to the reader a rather pointless quest, I can reveal that from this group would emerge the small group who masterminded the Ordnance supply success of D Day. This quest digs beneath many of the names that appear in my books, War on Wheels and Ordnance. It resulted in my book, Dunkirk to D Day.
at December 20, 2018 No comments: