Today is the day when I send my manuscript to the publishers. Months of work and goodness knows how many hours spent and how many words read and written, and I have but scratched the surface. I hope though that Ordnance will honour those who gave so much and had so much taken from them.

The men and women who equipped the army moved mountains. In August 1914 I believe that no one had any real idea of what lay ahead. The carnage was unforgivable; a whole generation lost. The achievement of whose engaged in supply was though remarkable.

It gave the fighting men the tools they needed to do the job. It also had other positive outcomes. War does force-feed technology, and that technology can be used in peace as in war. Work conditions were in many places transformed, with previously unheard of works canteens, for example. Women had witnessed their own potential, though tragically many would have to wait until after another war before they could fulfil it.

Lessons were learnt, though many seemingly as quickly forgotten. One can speculate endlessly why this might be. One reason surely was that they had been through hell and had no intention of returning. 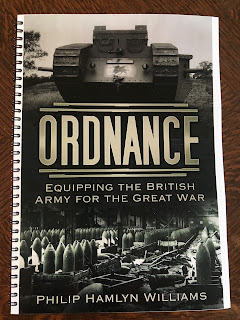 The British Army in August 1914 was supremely well trained; their rifle fire was so rapid that the Germans thought they were facing machine guns.

The army though was small and lightly armed.

The experience of trench warfare demonstrated a need for many hundreds of thousands more men, each fully armed. It also showed the need for very many more heavy guns. Outstripping all of these, by an order of magnitude, was the demand for ammunition: hundreds of millions of shells.

In Ordnance, I tell the story of how all this was supplied.

In 1915, as soon as ammunition arrived in France it was taken to the front and fired. By 1916 production had increased to the extend that storage facilities were needed in France.

In the March, before the Somme offensive, a new depot was partially destroyed by damaged ammunition exploding and causing other ammunition stored nearby also to explode. In late July 1916, once some 100,000 tons had been supplied for the opening days of the offensive, another ammunition depot received a direct hit from a single bomb. Again, a chain reaction was set in motion and the whole depot was destroyed leaving craters big enough to 'dock a battleship'. One shell became lodged among ammunition boxes, but failed to explode. 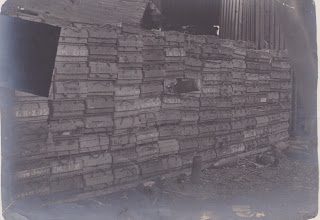 Lessons were learnt and a whole new approach was adopted, with safety and risk management at its heart, and which followed through to November 1918.

The production of ammunition was a story in itself. I tell in the book of the shell crisis in 1915 when divisions were rationed in the numbers of shells they could fire in a day. The situation was addressed by the formation of the Ministry of Munitions under Lloyd George which resulted in a network of shell manufacture and filling factories across the country. One such was at Chilwell where my maternal grandfather worked as supervisor. Its story replicated so much in this war that individual initiative and inventiveness really won the day. Accidents, though, happened and on 1 July 1918, 134 munition workers lost their lives in a massive explosion. They are remembered on the Chilwell war memorial. 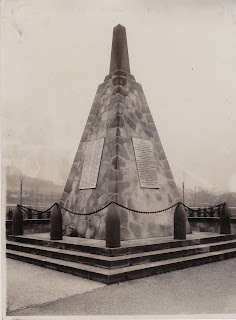 Chilwell was to become the army centre for mechanisation in WW2.