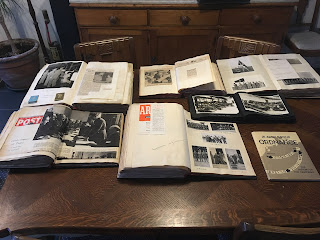 2020 - 2021: work on a book with a working title of How Britain Shaped the Manufacturing World, exploring the development of British Industry from the Great Exhibition of 1851 to the Festival of Britain a century later. This was prompted by a wish to find out more about the many companies I mentioned in my earlier books, Ordnance and War on Wheels.
2019: work on a biography of some twenty officers and one woman who played key roles in the Ordnance supply success of D Day, many of whom also served in WW1, a number of whom brought their skills and experience from industry. I am calling it Dunkirk to D Day. It takes us from a world of the pony and trap right through to the Cold War and the Britain which had never had it so good. It was published by Pen & Sword in April 2021.

2015 - 2019: work on a biography of William Smith Williams who discovered Charlotte Bronte and who, with his family, moved in fascinating circles and who was a friend of John Ruskin, who had this to say about Lincoln Cathedral:

I have always held (and am prepared against all comers to maintain my holding) that the Cathedral of Lincoln is out and out the most precious piece of architecture in the British islands, and—roughly—worth any two other cathedrals we have got).

Charlotte Bronte’s Devotee was published on Amazon in August 2019 and is also available to buy from the Bronte Parsonage Museum.

2016 - 2018: work on, Ordnance, a prequel to War on Wheels, about equipping the British Army for the Great War, published by The History Press in June 2018

2014- 2016: work on my book, War on Wheels, about the mechanisation of the British Army in WW2, published by and available from The History Press on 8 September 2016; talks and articles on War on Wheels and Ordnance.

2015 - 2016: work on MacRobert's Reply, a book about a Stirling bomber and the remarkable people connected with it. This was published by Story Terrace in a limited edition for subscribers on 20 December 2016.

2009-2011 Broken Bonds, a novel about human aspects of the banking crisis.

2008-2009  MA Professional Writing, University College Falmouth. The course has taken my previous writing experience and has added discipline and a far better awareness of the market and the needs of readers. I have focused on the Novel and Non-Fiction but have also gained experience of writing for the web and an awareness of business writing, features and script. I contributed to This Weekend, a project run in conjunction with the National Trust, the Creative Falmouth and ProfWriting websites.

2005-2008  BA Humanities, University of Exeter. At Exeter, and previously at Vaughan College at the University of Leicester, I wrote on Art and Architecture, Roman and Renaissance Poetry, Urban and Rural History, Shakespeare and Marlow, DH Lawrence and Dreams in 20th Century Literature. My dissertation was entitled: Children’s literature as Christian discourses: to what extent and in what ways may Philip Pullman’s His Dark Materials and the ‘Harry Potter’ novels of JK Rowling be read as Christian discourses? I was awarded a First Class Honours Degree.

2005-2007 Vaughan Writers. A number of us from the Vaughan College Certificate course set up a writers group and in our first year we published an anthology, Against the Wall, which won the National Association of Writers Groups Prize for 2007

2005-2006 Alastair: a novel set mainly in between the wars Paris which explores a man's search for his late mother's past.

2003-2005 Certificate in Creative Writing, Vaughan College, University of Leicester. This course covered Aspects of Genres, Narrative Drive, Writing beyond the margin, From reader to writer and back again; Writing for performance; and Preparing to be published. An article I wrote about the course was published in the iatefl magazine.

2001 NEC course in creative writing. This was my introduction to writing and got me hooked.

As a professional resume writer in the D.C. area, I have seen a number of common errors and mistakes my clients make. Here is my list of these mistakes. Save yourself the time, and, often the embarrassment, by ensuring these mistakes are not in your resume. cv sample