I try to imagine Brigadier Denniston and Colonel Cutforth in the early hours of 6 June unable to sleep, but equally unable to do anything more. Months of preparation and planning now had to stand or fall measured only by results.

I can more easy picture Colonel Cutforth since, as a child, I met him some years later when he had risen to the rank of Major General and had been Knighted. Sir Lancelot Cutforth, to a small boy, was all King Arthur and the Round Table and, from memory, Sir Lancelot did not disappoint. He was a tall dignified figure who, as a younger man, must have been the quintessential dashing army officer. His role though, with Brigadier Denniston, had been one of painstaking planning. The 21st Army Group which they supported comprised the British Second Army and the Canadian First Army each with their Ordnance units. Brigadier TH Clark and JAW Bennett were the respective Deputy Directors of Ordnance Services. Brigadier Clark had been on the disastrous Norway campaign with Colonel Cutforth and then had played a key role in North Africa.

I try also to imagine Bill Williams and Dickie Richards; Bill in particular who would carry the can if things did not go well. They too had done all they could. In the planning, the question of morale had ranked high and so Dickie’s Depots supplying camp and laundry equipment and especially clothing were in no sense less important than those supplying warlike stores. In any event all stores had to cross the channel and make it up the beaches.

The question to the fore of each of their minds was whether this time mechanisation would truly work. 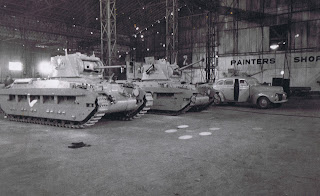 
On the back cover of War on Wheels, Max Hastings records the very positive verdict of the troops
at June 05, 2018 No comments: