It is a story that has been told in fragments, but, when taken as a whole, becomes truly remarkable.

It begins in Aberdeen where a young Alexander MacRobert sets out for India to seek his fortune. His success comes in the shape of the British India Corporation. Mac, as he is known, meets a young American, Rachel, from New England. She becomes his second wife and they have three sons. In 1922 Mac is created Baronet of Cawnpore and Cromar. Later that year he dies. The eldest son, Alastair aged ten, succeeds to the title.

Tragedy strikes a further three times as each son is killed, the latter two in the service of the RAF. Rachel gives them the means by which they can Reply, in the form of a Stirling Bomber which she hands to 15 Squadron.

The Bomber, call sign F for Freddie, is piloted first by Peter Boggis, who would make his career in the RAF, and then by 'Red' King. The first MacRobert flew many operations but ended its day in a collision on the ground.

The MacRobert crest was transferred to another Stirling and this crashed tragically in Denmark killing eight crew members. The crash is remembered to this day by local Danish people who wished to show their thanks to the British bomber crew for supporting them in resisting the German occupation.

Radio operator, Don Jeffs, miraculously survived and spend his war as a PoW before undertaking and surviving the Long March home. 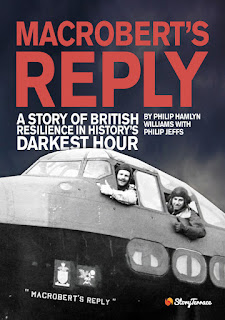