What the depots did

An ordnance depot must have been like a vast ‘Amazon’ distribution warehouse, but without computers. Delivery wouldn't be by courier who’d leave card if the customer was out; it was by soldiers often under fire and always under pressure. This is how wartime leader, Bill Williams, described their work.

'The fighting and technical equipment of the British Army consists of half a million different bits and pieces. These are made by many hundreds of different manufacturers scattered all over this country and overseas.The maker of a wireless set, for example, does not make the valves which go with it, or the batteries which work it. The maker of a gun does not make the carriage on which it moves, or the sights and the hundred and one intricate items of technical equipment, without which it cannot be fired. Somewhere the incomplete equipment has to be brought together.

Even the tanks come to us with empty hulls into which we fit the armament, the wireless and the vast array of fighting and technical equipment before they can be issued as fighting tanks.

A 25-pdr. gun is only a headline to newspapers. To a Central Ordnance Depot it is 2,000 different pieces, plus another hundred accessories. If any of these accessories are missing, if one maker falls behind in his production programme, if one case is packed for Libya and an essential part left out, this 25-pdr. gun cannot be used.

A key role for the RAOC was to estimate the likely requirement for both original equipment and spare parts. This would depend on ware and tare but also on estimated casualties from enemy action. With motor vehicles in particular this must have been well neigh impossible. Bill continued for his press conference audience:

You can see there the orders coming in from the War Office, the formations and the overseas theatres of war. We use teleprinters for speed and accuracy. You can see the tanks, the guns, the packing cases leaving the depots for Libya and Russia and India and even America. Codes and symbols tell the initiated their destination, and ensure that the right packages are loaded on the right ship.

Let us suppose that certain packages of vital accessories for a shipload of guns are loaded in another ship, and that particular ship in the convoy is sunk. It means that the guns will be useless when they arrive in the theatre of war.

You can see women and men whose job it is to keep an accurate record of all the bits and pieces they deal with. You can see others undergoing their infantry training for defence of the depots and for service overseas. You can see tanks being tested and fitted for service. You can see repairs carried out. Ordnance depots are towns in themselves, humming with activity alive for twenty four hours every day.'

Had you tuned into the BBC Home Service at 7.00 or 8.00am on Saturday 19 July 1941, you might have heard a slightly different story in a recorded piece by Richard Sharp about his visit to an Army Supply Depot.  It was the very old story of the Crimea and how an Army Supply Depot managed to send a shipment consisting entirely of left boots. Sharp makes the entirely valid point that, with a 20th century depot handling some 97,000 different items, the potential for mistakes is increased exponentially. Sharp marvelled at how the new depot was equipped: its own electricity plant, telephone exchange, furnaces and print works, but then said this:

All this is very nice and comforting, of course. It’s good to know that we have all this stuff, particularly when you remember that it’s only passing through, a sample of what thousands of factories are pouring in to be distributed to the troops, but - the depot that issued that shipload of left boots was a big place too, no doubt. What about the efficiency of this place? The printing press prints two million pieces of paper a week. Think what muddles you could make with two million pieces of paper?

The answer came from a Lieutenant Colonel in charge of organisation and planning. This officer’s approach was simple, bring to bare that skills learnt from industry. Things like planning routes so that lorries both go out from the depot full but also return full. The lorries covered a million and a quarter miles in three months and so the savings in petrol alone would have been huge. It was not just petrol; rubber was in short supply and so all road journeys had to count. It wasn’t just transport, the way transactions were routed through the depot make a huge difference to staffing requirements. The Lieutenant Colonel estimated that better procedures had saved 55% in costs. As the war entered its fourth and fifth year, this would matter not so much because of money but because there simply were not the people available and labour saving became very much the order of the day. 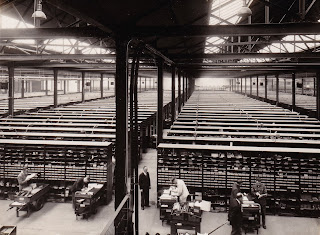 The depots were throughout the UK