The formation of REME

In 1942 Sir William Beveridge chaired a committee to look at making the best use of the technical skills the army had. As part of this the committee recommended that:

There should be established in the Army a Corps of Mechanical Engineers. The success of the Navy in making use of mechanical engineers is not due solely to the fact that the naval problems are simpler to those of the Army. It is due also to the fact that the Navy had had for so long an engineering branch of high authority and has had other technical branches specialised on torpedoes and electricity or ordnance. The Navy is machine minded. The Army cannot afford to be less so. The Navy sets engineers to catch, test, train and use engineers. Until the Army gives to mechanical and electrical engineers, as distinct from civil engineers, their appropriate place and influence in the Army system, such engineers are not likely to be caught, tested and trained as well as in the Navy; there is a danger that they will be missed by men who main interests and duties lie in other fields.

They proposed that the technical elements of RAOC, RASC and Royal Engineers should be combined in the newly formed REME which in future would carry out all major repair work. The RAOC would take over all vehicle and spare part provision.  The RASC would focus on its transporting activities, since, at the same time, it lost its catering activities to the newly formed Army Catering Corps.

From this recommendation REME was born and went on to work closely with the RAOC for the duration of the war.

Post script:
My researches into WW1 indicate that the AOC, as it then was, had extensive repair workshops behind the trenches dealing mainly with artillery. In the early part of WW2 the RAOC had major repair capabilities, not least in setting up the army centre of mechanisation at Chilwell. 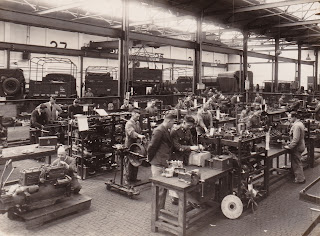