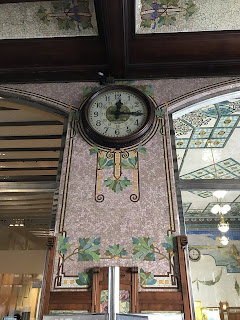 What would it have felt to be here, in Paris, in 1917. The war had dragged on for three gruelling years. Everyone must have known someone who had died or been injured. Yet life went on.

The firm of Joly Fils had been given the job of storing, cleaning and repairing British uniforms when summer moved on to winter. Not only uniforms but blankets, great coats and underwear. To say that Christmas had arrived early would be unfair, but there must have been a sense of clouds with silver linings. The Paris fashion houses, which had been deserted by war,  were given the job of cleaning fur lined coats.

Dressmakers remade the kilts of the Scottish regiments and, from the fine quality of the material, were left in little doubt that Scotsmen need wear nothing under them.

There were surely other examples of the war driving the economy. There were tales of the massive number of bakers gathered round Calais in order to be part of the machine feeding the troops. Of greater moment were the armament manufacturers, the ship builders, the clothing and boot companies.
at February 10, 2017