The Ordnance presence in Selonika was bedevilled by that which bedevilled so much of the Great War: Mud.

'There were not enough officers or men, not enough room, not enough transport, not enough labour and not enough stationery – this last a very important matter when any kind of storekeeping and accounting has to be established. Besides all these deficiencies there was one very serious surplus – mud.'

Like everywhere, though, there were flashes of normality such as the Christmas concert in 1916. The programme was signed by Colonel McVittie who later came out of retirement in the early years of WW2. His son was taken prisoner by the Japanese in Hong Kong and later led the RAOC in the Cold War. 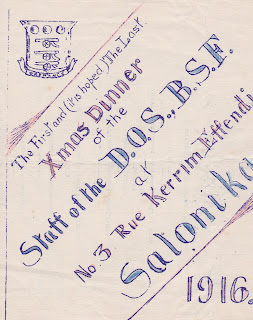