I have spent the last four years writing about how the army was supplied in the two world wars. It is now time to take a step back and look at the results of my research in a longer historical frame.

I could begin with bows and arrows, or with gunpowder and shot; I decided to take as my starting point the Crimea and the groundbreaking work by William Armstrong in the invention of the rifled heavy gun. I then follow the story of guns and ammunition through to the modern arms industry. If ever there was an example of the law of unintended consequences, surely this is it.

I look at three aspect of Ordnance supplies. So, in addition to the first, guns and ammunition, vehicles demand serious attention. It wasn't by chance that my book on WW2 was called War on Wheels. What I found was, to all intents and purposes, the history of the motor industry.

The third aspect is the nitty gritty: just how you get the right item to the right place at the right time and indeed in the right condition - far from simple. Apparently my father is still known for his attention to packaging. I shall tell why, amongst much else.

So, for those who have heard me before, this is a new talk! 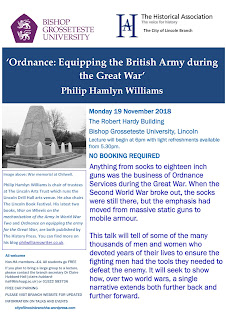