Fascinating day writing up my mother’s account of the trip to the Middle East and East Africa she made in November and December 1944 with my father when she was his PA.

There are vivid descriptions of the places they visited.

A good deal of tough work was done much in preparation for a long and gruelling land war against Japan. A substantial Ordance infrastructure had grown to support the North Africa campaign. It now had to be cut back. Huge effort was being put into stripping scrapped vehicles for spares, but without regard to demand. The massive depot at Alexandria, dating back really to WW1, had to be closed leaving only Tel El Kebir and Tura.

I plan that this and other material I am working on will appear in a third volume of my trilogy on Ordnance. 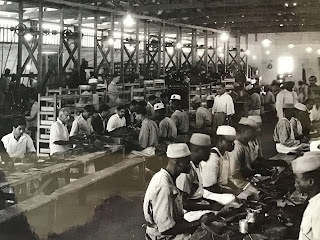 The photograph is of a boot factory at Nakuru in Kenya
at April 11, 2019