Extracts, taken from War on Wheels, from the account of RAOC soldier Ted Mordecai who had been caught up in the desperate fighting in Arnhem:

I heard someone shouting, "Does anybody here know anything about Bren guns." The shouting went on and so I went into a front room covering the street and told an officer that [being RAOC] I knew something about Brens. There was a gunner manning the Bren gun in the window with a corporal acting as his No 2. The gunner said he couldn't fire the Bren as it wouldn't work. I moved into his position and tried the standard procedure of removing the magazine, cocking the gun and squeezing the trigger. I told the corporal that the gun was OK and put the magazine back in and squeezed the trigger. It didn't work as the bolt would not push the cartridge into the barrel, so, removing the magazine, I ejected two of the cartridges, put the magazine back in the gun and tried again. This time it fired. Whoever had loaded the magazine had crammed too many cartridge in it, consequently they were too tight to move. Although the magazine would hold 32 cartridges, it was policy never to put in more than 28. The officer asked me if I would take over the gun...I therefore became the Bren gunner of the last bastion.

Ted manned the gun until the ammunition ran out and he then reverted to his Sten like the others. The mad dashes from one house to the next continued as the Germans followed demolishing houses with the fire of 88mm guns.

There was a lull in proceedings and it was during this period that Jerry called upon us to surrender and a truce was called whilst a discussion took place between the Germans and our officers who were left. The truce last about an hour during which time Jerry agreed to let us hand over our wounded. After the wounded had been evacuated the Germans again called upon us to surrender as we were completely cut off, surrounded and nearly out of ammunition. Jerry was told in Army fashion to "Shove off" but much cruder and when someone threw a grenade at them hostilities commenced once again.

I felt a blow like being hit with a stick on the right side of my face and across my right eye as the blast whipped under my helmet. It lifted me off my feet and knocked me flat out and when I came round I couldn't see a thing. Eventually I could make out things in the darkness with my left eye, but all I could see out of my right eye was a blinding glare. I felt my face but couldn't feel any blood and, as the shelling was still taking place, decided to try to find some cover. I crawled over the ground and eventually found a slit trench up against the wall and flopped in on top of another chap lying in the bottom. The shelling kept on all night and there was no reply from any of our chaps at all. They were either lying low or there weren't any left.

Dawn eventually came and everything was very quiet...the chap under me stirred and said he was going to surrender...I stood up in the trench and the first thing that met my sight [through my left eye] was an 88mm shell with a bent nose lying half over the edge of the trench...being careful not to disturb it I climbed out...I waited a while, but couldn't hear any shooting and so decided to give myself up.

When night fell, a small group of us, being walking wounded, were herded into the back of a small truck and transported to hospital.

Later I volunteered to help out one of our MO's...it opened my eyes to the aftermath of battle as I was assisting in an amputees ward which had both German and British patients...Another thing that brought home the horrors of war was seeing a pile of discarded odd boots where they had been thrown after legs had been amputated.

As Jerry had said, "For you Tommy, the war is over.” 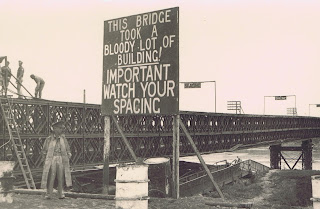 Some say it was a waste of our airborne troops, others say it was the old saying 'A bridge to Far'. I prefer to believe that for 6 days, the troops held of German SS elite with their only weapons, side arms and mortars with very few Artillery pieces, showing much bravery and fighting spirit. Was it for King & Country? No, it was for a soldier's mates who were fighting and dying all around. British, Polish, American and Dutch. May their God still 'Bless 'em all'