In late 1940 it became clear that there was still insufficient capacity in the RAOC depots. Accordingly a brand new depot was to be set up under the command of Brigadier Palmer. This depot was going to break the mould by bringing together all warlike stores including, importantly, motor transport which by then had taken centre stage.

Photographs of Palmer show him always with a pipe, a small man with neatly combed hair. He had been on the first Ordnance Officer’s Course but it seems had not covered himself with glory having failed the ammunition exam paper. He had commanded 1BOD in the British Expeditionary Course. We don’t know whether he sailed on the Lancastria, but it is certain that many of those men who lost their lives had been under his command.

On 13 January 1941 Bill Williams wrote to him with the instructions to build a very large and entirely new type of depot as a key platform for the invasion of mainland Europe. Palmer would go on to be promoted to the rank of Major-General with oversight all the motor transport within the Corps.

Palmer was man with 29 years of experience in ordnance and he set to his task with relish at having the rare opportunity of fitting buildings to stores rather than, as had been more usual, of fitting stores into buildings which had been built for other purposes. The depot was to be different in two other important ways. In view of the difficulty in securing sufficient local civilian staff, it was to be an all military establishment. It was also to deal with every kind of supply except for ammunition. It was to have the largest tank repair shop in the country.

Having the opportunity to design the buildings, much thought was given to optimum size. Large buildings of 300,000 to 400,000 square feet such as those at Chilwell or Donnington were thought too generous a target for air attack, whereas the smaller 40,000 square foot buildings favoured by the RAF were too small to be operated with maximum staff efficiency. A happy medium of 100,000 sq ft was selected and worked well. There were to be other ‘special’ features: walls and roofs were to be independently supported. Concrete roofs provided protection from incendiary attack. Rail and road routes inside sheds helped to avoid double handling and having them sunk meant that ramps could be dispensed with. The floors of the sheds would be on slight gradient sloping down from the Receipts end to Issues. Clerical functions were also decentralised to improve liaison between ‘stores’ and ‘paper’ . The covered space totalled 3 1/4 million square feet.

The site was to be between Towcester, Warwick, Cheltenham, Swindon, Oxford and Aylesbury which allowed proximity to a civilian workforce in peacetime and the avoidance of airfields. The place chosen was Bicester just outside Oxford where today thousand flock to shop and is to become a garden city; then it was countryside which those fighting sought to preserve as English. 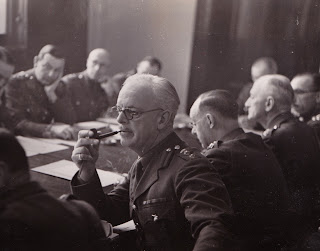