This is the speech that Controller of Ordnance Service, Major-General 'Bill' Williams, gave in Halifax in July 1944

I am deeply conscious of the honour of being asked to open the “Salute the Soldier" Week for your great Town.
When my good friend Sir Harold Mackintosh and your Committee asked me to do so, I said "Yes, certainly, I will do anything to help. Perhaps you would call it a selfish gesture, as the more money you save the easier my job becomes.
As Controller of Ordnance Services, I handle practically the whole of the· equipment with which our Army fights.It is your money that buys that equipment, so I act as your agent.
It is rather like an enormous ·industrial concern, you are the shareholders and I am the Director of the firm responsible for placing orders and delivering the goods to the customers. The customers are the Army, every unit; every soldier to me is a customer to be clothed and equipped .
My Corps, the Royal Army Ordnance Corps, incidentally is one of the oldest Corps in the Army, as in bye-gone days it was responsible for supplying the Army with bows and arrows and armour for the men at Arms, in fact, I believe in the early stages of our history we planted the yew forests, from which the bows were made.
Well, to continue, the R .A .O.C. of to-day supplies the soldier with all his equipment, weapons, vehicles, tanks, guns, wireless equipment, ammunition and explosives, Radar equipment; accoutrements, clothing, camp equipment, in fact, almost everything which he needs to fight with: so that the firm in which you are shareholders holds stocks of stores ranging from trouser buttons to tanks and big guns.
I think I will give you a few figures to bring home to you the large sums of money which are needed to equip and maintain a modern Army. A tank costs something in the neighbourhood of £14.000. spare parts to keep it going for a year entails another £4,000.The 25 pdr. gun which is the best Field gun in the world costs £2,250, with a further £1,000 for the tractor. Both these in turn need large quantities of spare pats to keep them going.
The R .A .O .C. to-day are handling over 750,000 different types of stores, all these have to be purchased and sent to the right place at the right time, if we are to wage war successfully against the Germans and the Japs. This is no mean task and without your money it would be an impossible one.
I have been fortunate enough to see at first hand how your savings are helping to win the war.I have been round the great production centres, both in England and America and Canada, and I have seen the vast spate of munitions of war pouring out to all the theatres of war throughout the world, and particularly during the last few months to this great European theatre which will be probably the greatest military operation which has ever taken place in the history of the world.
In addition to seeing the way your money is being spent and the manufacture of this vast and formidable array of equipment, I also, like a good business man, go to see my customers, the fighting men in the theatres of war, and during the last eighteen months I have visited firstly Tunisia and Algeria when we were formulating our plans to push Rommel out of North Africa and then to Sicily and Italy for the invasion which now seems to be going pretty well, thanks again to the vast range of equipment which has been purchased with your money.
Next, I visited Middle East, Iraq and Persia, India and Burma, or as near as I could get to it. All these different theatres of war have their own special problems. They require equipment of different types; equipment has to be specially preserved and packed, according to the climatic conditions in which it will be handled and used.

The war with the Japs presents us with an entirely new state of conditions, and if we don't look well ahead and plan and get our equipment together, we cannot hope to win that war in a reasonable period.
I know you all realise how vitally important it is that our fighting men are equipped with the best. We all want them to have the best and finest weapons which we can provide.

Now, war in itself is essentially wasteful and if we are to be victorious we must waste more, or what appears to be waste, than the enemy. This is the cost of war.

It is rather like a business: you have two courses open to you, either you carry on with your old-fashioned plant and gradually fall behind in the race, or you constantly instal the very latest and best plant, and thus get ahead of your rivals. So it is in war. It is even more essential, in fact it is vital that we should be ahead of the enemy in all of our equipment. Our fire-power must be greater than his. Our tanks must be more powerful, faster, better armoured, in fact we must ruthlessly scrap equipment before it is out of date if we are to win our way to final victory, and that costs money.
You will realise, therefore, that your money must constantly roll in,. but please don't think we in the Army take that money for granted. Believe me we make it go as far as we can and we only scrap equipment and buy new equipment when we know it is essential and vital for Victory.
We know that to save it you have to sacrifice many of the little luxuries which in peacetime you have always enjoyed.
It is our aim to make the most of th.e equipment at our disposal.
By the savings of the people in this country, our Empire is now being equipped with the latest and best and deadliest weapons in the world and I am confident that our fire-power is now superior to that of the enemy. We know that our Tommy should be armed with the best and finest weapons obtainable.I am here to-day as I have already told you to ask you to lend even more to fight our way to Berlin and Tokyo.
I know you all realise that you are getting more for your money than the interest paid on your savings. You are helping to ensure for yourselves and your loved ones, a future which we all sincerely hope will be free from the horrors of war.
Your pennies, shillings and pounds are building up a rampart against those who would destroy England, or at any rate leave it as a little island off the coast of Europe and not the centre of the greatest Empire that the world has ever known.
Halifax has its own Regiment, the Duke of Wellington's Regiment, one that I know personally and have had the honour of serving alongside on at least two occasions. This is a regiment with great traditions and a fine record, and I would like you to feel that all that you save will help to give your local boys the best possible equipment for their own regiment, and the best possible equipment and fire-power in the Royal Engineers, the Royal Artillery, and the Royal Armoured Corps, to support and enable them to reach their objectives in the field of battle with the minimum loss of life.
I hear that Halifax holds the War Savings record for any Town in the amount subscribed per head. The more heads that lend their money to their country, the greater the chance of beating previous records, in support of your own Regiment and all your gallant boys.
Let "Salute the Soldier" be the greatest of all your record weeks, and don't forget that this campaign is the personal inspiration of your own great citizen and Chairman of the National Savings Committee, Sir Harold Mackintosh.
A final word regarding our mutual friend, Sir Harold. He is a Halifax man and I am sure you must be very proud of him. I have had the good fortune to be closely associated 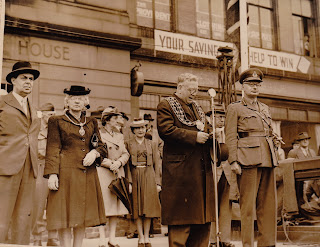