The loss of the Lancastria

Many Ordnance men were evacuated at Dunkirk, but many too became prisoners of war.

The position with the Nantes depot was a little different, since from the time of the first withdrawal Colonel Palmer had been sending valuable warlike stores back over the channel. Given its position a good way from the German advance there was more time for an orderly evacuation. Tragically an even greater disaster awaited.

On 17 June some 6,000 soldiers and airmen, including the remaining 200 Ordnance personnel, boarded SS Lancastria, a 17,000 ton former Cunard Liner. Just as it was heading out to sea, Stuckas struck and it sank within fifteen minutes with the loss of 2,000 lives including 50 Ordnance men. Tragic though this was, the greater loss was of RAF Ground Crew who had boarded first and who were ‘crammed like sardines’ under deck. Jack Lumsden survived by jumping into the sea and swimming free. He went on to serve at Chilwell, Derby and Burton retiring as a Major after 37 years with the RAOC. Douglas Hanson was another RAOC survivor from the Lancastria, having spend nine months at the MT depot at Nantes. 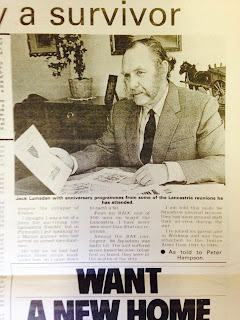