AEC and the big beasts

AEC at Southall in West London, the manufacturer of the world famous London bus, turned its production in wartime to Matador and Marshall heavy trucks. These had all-wheel-drive chassis with six pairs of wheels powered by 120bhp engine through two gearboxes giving six speeds to all three axles. These beast were used, amongst other things, for transporting pipes for the construction of oil pipelines.

Design work on what became the Matador was carried out by Charles Cleaver of the Four Wheeled Drive Motor Company. AEC bought out FWD and Cleaver finished the design at the Southall Factory. The initial contract was for 200 trucks; by the end of the war 10,500 Matadors had been produced.

AEC also produced the six wheel drive model 850 which it developed from the FWD R6T. Only 57 of these beasts were produced by were used by the RAOC on occasions as temporary tank transporters. 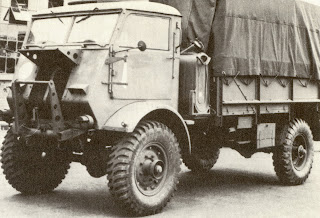