Dunkirk and the RAOC

Men of the Royal Army Ordnance Corps played an important role in the Dunkirk evacuation.

The British Expeditionary Force arrived in France in September 1939 in many ways as the previous generation had done in 1914. An ordnance depot was set up in Le Havre. Ammunition dumps were formed well to the west.

Although twenty five years separated the two events, I suspect the same question was asked of Ordnance: was the army as well equipped as it could be?

In 1914 it was all about guns and the opinions remain divided. Certainly there were not enough heavy guns; there were insufficient high explosive shells and far too few machine guns.

In 1939 it was more about vehicles. Some 60,000 came across and most were left behind at Dunkirk. 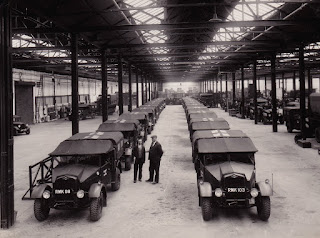 Crucially only a handful of tanks arrived in France and they were completely outclassed by the Germans. Much has been written on this, but it is alarming in retrospect that so little seemed to have been learnt from the experiences of  tanks at Cambrai and in the final assault in 1918.

War on Wheels looks at the BEF through Ordnance eyes. It explores the equipment question but though the eyes of people who were there. It then follows some of them in the retreat and some into captivity after they had been part of the rearguard action. A key Ordnance role was to keep the guns firing; a task later taken on by REME. Finally it looks at the role of Ordnance depots in caring for those who made it home.
Dunkirk to D Day focuses on the leaders of the RAOC and what in their lives prepared them for the task of re-equipping the army after Dunkirk. It looks behind the scenes at the tremendous challenges overcome, mistakes made and lessons learnt.
In further posts I offer first hand accounts of the withdrawal and the welcome home, I then set out the task ahead.