Why I wrote Ordnance

War on Wheels took me two years to write.

I researched my mother's albums of my father's war - he led the RAOC which carried out the mechanisation of the army and supplied the troops with all else they needed except food and fuel.

I researched reminiscences and diaries of many of the men and women who had served in the RAOC.

I researched the massive roles of the British and American Motor Industries.

I came away with questions.

Many of those who served had, only a quarter of a century earlier, gone through the hell of the Great War. It was clear that many lessons had been learnt but also ignored. I needed to find out what and why.

For example in both 1914 and 1939 a well equipped British Expeditionary Force had crossed to France. In both cases massive depots were set up in Le Havre and elsewhere to hold stores.

In 1914 the stores had to be evacuated at speed to escape the German advance and became so disorganised that little could be supplied until the advance and retreat ground to a halt.

In 1940 the Germans advanced again, but this time so quickly that men had to be evacuated back to England at Dunkirk leaving thousands of tons of stores behind.

Ordnance, which is to be published on 1 June 2018 by The History Press tries to answer this and other questions. 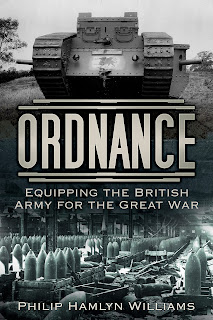