The Rootes Group was part of my childhood. My Dad had a Humber Hawk and then a Super-Snipe. My mother had a Hillman Minx, and my sister and I learnt to drive in a Hillman Husky. My uncle rallied Sunbeam Rapiers.

My father, Leslie Williams, became a Director of Rootes in 1946, and was given the task of creating Ladbroke Hall, a state of the art depot for commercial and domestic vehicles. 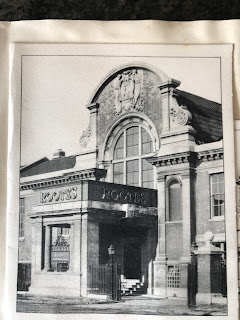 Once Ladbroke Hall was up and running he was moved to the export division. My mother kept albums recording events from this time with many photographs, invitations, copies of speeches, travel documents. The Middle East was the key market and he went on a UK Trade Mission in 1953. One name that keeps appearing is Emile Bustani .
My father retired in 1956.
Men from the Rootes Group had played a major role in the corps, the RAOC, which my father led in WW2, so much so that they were nicknamed the Rootes Rifles, alongside the Lucas Light Infantry. I tell a bit more about the role of the motor industry in this linked post, and in my books.
I have written a third book to sit alongside my books War on Wheels and Ordnance, looking at some of the key people who served the RAOC in both World Wars. It is titled Dunkirk to Day and is to be published by Pen & Sword in April 2021
at August 21, 2019