What would life hold in store for these young men?

Bill Williams, Rivers Macpherson, Charles de Wolff and Cyril Cansdale (seated) taken in Woolwich following the first Ordnance Officers course after the end of the Great War.
What would life hold in store?
By D Day, Williams was Controller of Ordnance Service and Cansdale his deputy; de Wolff was COO of the vast depot at Donnington in Shropshire (Woolwich in the country); Macpherson had retired. Of others on that course, Dickie Richards was Director of Clothing and Stores, Geoffrey Palmer was COO Bicester and Alfred Goldstein was COO Greenford. 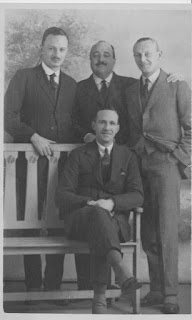