In 1934 the British government secretly authorised the creation of a centre for army mechanisation on the site of the former shell filling factory at Chilwell near Nottingham. On the outbreak of war, Central Ordnance Depot Derby in Sinfin Lane was created as a major sub-depot to Chilwell by ‘Robby’ Robinson, a former managing director at Dunlop. He was one of many managers brought from industry and with him what was most telling was his approach to man management. Amongst other initiatives, in 1943 he instituted the production of a daily news sheet for the depot which itself tells the story of the lengths he went to build a team.

The news sheet gave news of the war, for example, Operation Market Garden, the Arnhem mission, day by day without any hype and not hiding the terrible losses. At a more parochial level, an earlier edition had a piece about gaskets and how they have to be handled carefully (later there is a piece telling how, in view of shortages, some gaskets were being made from wrapping paper.) On the subject of paper, a new recruit is quoted as asking why there is so much paperwork - the answer, ‘it’s all about checking; if everyone took more care it wouldn’t be needed!’

At Derby like most of the depots, both training and education were provided to all staff including motor engineering, building trades, gardening, poultry keeping, accountancy and shorthand, languages, history, politics and science.

Each month Robinson had to send in a report of activities. He reported that Music While you Work was broadcast over the tannoy with some words of introduction by him. There were then reports on education opportunities before getting to the detail of the business of the depot. Even here, there was a touch of civilian management. Photographs of the vehicle, scout car or tank, for which spares were destined were exhibited at the end of the respective rows of bins where the packing was taking place and this ‘greatly stimulated interest in the job.’

March 1944 saw a great increase in the overtime required and a system of redeployment of clerical staff to store duties when needed. As well as Music While you Work, haircuts were offered during working hours, given the demands of overtime. A one point Robinson realised that there were simply not enough hands to pack all that would be needed. Help was found from pupils at Bemrose School in the Easter holidays of 1944. As elsewhere there were poster campaigns but, at Derby, including War Charities and Blood donors.

The book, War on Wheels, makes extensive use of archival material and first-hand accounts to follow some of the men and women who mechanised the British Army from those early days at Chilwell, through the near disaster of the BEF, Desert War and Italian invasion, to preparations for D-Day and war in the Far East. Illustrated with some fascinating photographs from the time, War on Wheels explores the building of the network of massive depots, including Derby, across the UK and throughout the theatres of war that, with creative input from the UK motor industry, supplied the British Army. 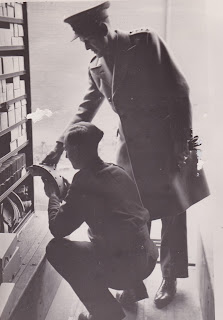