Nuffield's role in the Battle of Britain

It became clear very early in the war that the RAF was 'wasting' a great many planes, in the sense that planes crashed and could no longer fly. Nuffield was commissioned to set up a network of Civil Repair Organisations which would collect the crashed aircraft, bring them to repair factories in various parts of the country and, largely by trial and error, put them back into airworthy condition. This was a massive operation that provided vital support in the Battle of Britain.

Lord Nuffield was a single minded, patriotic entrepreneur. He had seen the threat from Germany building in the mid thirties and had set up, as an offshoot of the Riley company, a factory to manufacture aero engines. In spite, or perhaps because this was at his own expense and initiative the Air Ministry declined to make use of it.

The Nuffield organisation also had much to do with the design and manufacture of tanks but with far greater impact in the desert rather than with the British Expeditionary Force. It wasn't just tanks, in Coventry the Nuffield Organisation manufactured Bofors guns under licence from Sweden. It, like the other major motor companies, manufactured anything from trucks to ammunition, steel helmets and trucks such as the Morris Commercial. 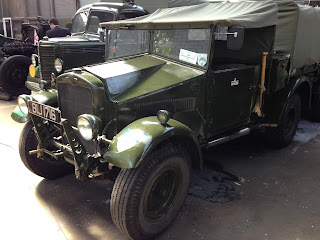