The Tank and the Lincolnshire Agricultural Engineers

The tank had been a British invention, the first examples having been manufactured by William Foster & Co in Lincoln. 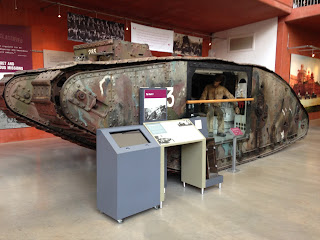 The story goes that in 1915 First Lord of the Admiralty, Winston Churchill, had become horrifically aware of the stalemate of the Western Front and how young men were being slaughtered because, whilst mankind had invented bullets and shells, it had not yet found an effective defence against them. Thus time and again the order would come for an advance and time and again it would fail with horrific loss of life. What was needed was a machine out of HG Wells, a ‘Landship' protected by steel armour capable of travelling over trenches, mud and barbed wire. With Churchill’s influence it was the Navy who made the first prototypes and hence the initial name of Landship. The biggest problem was the sheer weight of armour.

Quite separately, Lt Col Swinton, then a war correspondent, had identified the need for, ‘a power-driven, bullet-proof, armed engine capable of destroying machine guns, of crossing country and trenches, of breaking through entanglements and of climbing earthworks.’ Swinton had been told of an earlier invention by Hornsby Agricultural Engineers of Grantham of a tracked vehicle suitable as a cross-country tractor. Whilst the design had won first prize in a 1908 War Office competition, the company had failed to make it a commercial success and so had sold the patented track system to the Holt Tractor Company of California who had found a strong demand for such a vehicle from their agricultural customers. The Holt system seemed to address the problem of weight.

Contracts were awarded for the production of 100 landships to Fosters where the naval officer responsible, Walter G Wilson, had joined William Tritton. The project was of course secret and it was let known that the factories were producing motorised water ‘tanks’ for use in Mesopotamia, the name though stuck. Following a period of experimentation a revised tracked version proved satisfactory and over four thousand were produced.

When Churchill returned to office as Minister of Munitions, he resumed oversight of the project and so had a hand in the victory at the battle of Amiens in August 1918 when 600 British Tanks sent terrified Germans into headlong defeat. In time they recovered their cool, but crucially morale had been broken by this invention with which Churchill had had more than a hand.