My father, Bill Williams served throughout WW1 and joined some thirty others on the first Ordnance Officers Course following the war. Shortly after the course ended, the Duke of York visited and a photograph was taken. I'm sure Bill would have looked at it most days. 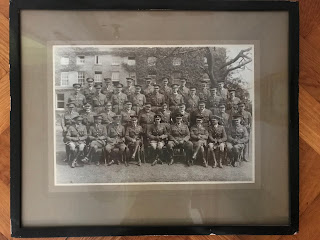 Bill would have remembered Dicky Richards, his friend and rival over so many years. They had met in France in 1916, at St Venant, when Dicky commanded an ammunition train and when Bill was Ordnance Officer to the 19th Division, Les Papillons, under his hero, General Tom Bridges. Bill remembered Dicky as the life and soul of the course. He would also have remembered Charles de Wolff, ‘Wolffy’, for they and their young wives had shared digs in Blackheath from where they travelled daily to Woolwich. Bill definitely would have remembered his bicycle, and how Wolffy had played a practical joke by placing a drawing pin, sharp side up, on the bicycle seat; and how he, Bill, did not flinch.

There were others. Jack Omond, standing next to Bill, who had written a very honest account of the lot of Ordnance officers in the First World War. According to Brigadier C.H.E. Lowther, who wrote his obituary, he was one of the ‘lost generation’. In a sense, most of those mentioned in this book are of that ‘lost generation’ who came to adulthood just before or during the Great War.

Geoffrey Palmer joined as a private in the Honourable Artillery Company (HAC), and was always very proud of his service in the ranks. Wallace “Picky” Pickthall was commissioned in the West Yorkshire Regiment in January 1913 and crossed to France in November 1914. Cyril Cansdale had served in the London Regiment as a territorial for two years before the outbreak of war. He was commissioned and joined the Army Ordnance Department, as it was then known, in December 1914. The Territorial Army had been formed in 1908 drawing together the former rifle volunteers and Yeomanry. The London Regiment had within it Battalions focused on Great London areas, but also trades and countries of origin. For example, the London Scottish was the 14th Battalion. The HAC was a battalion, but declined to be given a number.

Then there were others on the course who were in the Royal Artillery, and, so, not in the photograph. Gordon Hardy had served in the Royal Garrison Artillery attached to the RAOC. Neville Swiney was army through and through. On graduation, he was Senior-Under-Officer at the Royal Military Academy in 1916 before crossing to France.

Alfred Goldstein was also not in the photograph, since he was in the Royal Garrison Artillery and, so, not then in the RAOC. He did, however, come top of the course.

Many other talented men joined the RAOC between the wars. Jim Denniston, a former Seaforth Highlander, undertook the key role of DOS for the 21st Army Group on d Day.

These professional soldiers were joined in the late thirties by men from industry who brought essential expertise from civilian life. Here are just some of them.

Former Steel Industry Director, Brigadier Edgar (Reddie) Readman, ran the massive motor transport depot at Chilwell. Former Dunlop manager, Colonel Bob Hiam, commanded the armaments depot at Old Dalby, which supplied power tools and, famously, Bailey Bridges. Hiam would command the second depot to be set up in France following the invasion and go on to command the depot at Antwerp supplying the final push into Germany. A fellow Dunlop man, Colonel Robbie Robinson, who had commanded the depot at Derby had in 1944 been given the role of Inspecting Officer Overseas planning supply for the invasion of Burma. Former manager at Tecalemit (the garage machinery manufacturer), Colonel Arthur Sewell, was in command of the depot at Feltham, which was at the forefront in developing effective packaging that would become increasingly important in South East Asia.