COD Derby was commanded by Robby Robinson who had come to the army from Dunlops.

In my research, I looked at the monthly war diaries he wrote. The tone and indeed content of his reports were wholly different to those written by his permanent officer colleagues.

The first matters covered were entertainment and sport followed by depot staff. For example, there was in January 1944 a book week. Music While you Work was broadcast over the tannoy with some words of introduction by the CO. There were then reports on education opportunities, before getting to the detail of the business of the depot. Even here, there was a touch of civilian management. Photographs of the vehicle, scout car or tank, for which spares were destined were exhibited at the end of the respective rows of bins where the packing was taking place, and this ‘greatly stimulates interest in the job.’ The February report covered the Derby Debating Society on the motion, ‘Conscription should be continued after the war’. In relation to business, the packing of landing reserves and beach maintenance packs was reported. March saw a great increase in the overtime required and a system of redeployment of clerical staff to store duties when needed. Haircuts were offered during working hours, given the demands of overtime. As elsewhere there were poster campaigns but at Derby including War Charities and Blood donors. 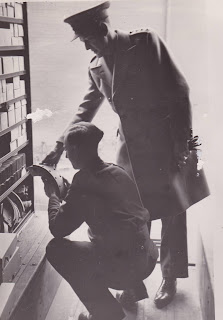 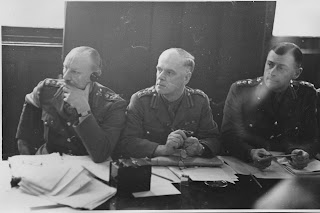 Wolffy, Bell and Robinson at the COO meeting
Robinson was given the job of bringing the former RASC depot at Feltham into the RAOC fold. He was then appointed RAOC Inspector overseas, seeking to raise standards of working methods in the Middle
East and India in preparation for the expected long and gruelling land war in the Far East.
His contributions to the RAOC Gazette after the war were immensely helpful in painting the word pictures of many with whom he served.